The town lies on the west bank of the Ottawa River, at the confluence of the Petawawa River. Situated across the Ottawa River from the Laurentian Mountains, and east of Algonquin Park, Petawawa is a favourite stop for outdoor enthusiasts, anglers, hikers, canoers, and kayakers. 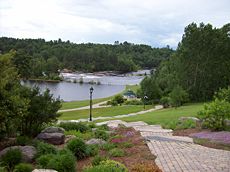 The earliest settlement in the Petawawa area was inhabited by the Algonquin First Nation. The name of Petawawa originates from a local Algonquin language word, biidaawewe, meaning “where one hears a noise like this” (describing the Petawawa river).

In the late 19th century, the area was surveyed and settled by emigres from Scotland, Ireland and Germany. The land was unsuitable for crops, but the heavily forested surroundings were useful for logging. The Canadian military acquired land in the area in 1905, which later became Canadian Forces Base Petawawa. During this period it was used as an internment camp for German POWs during World War II. Later, it became home to the Canadian Airborne Regiment before it was disbanded in 1995. Today, it is one of Canada’s largest ground forces bases with members deployed throughout the world on various missions supporting the United Nations in peacekeeping or the War on Terror.

Tourists to the area have commented on how similar the landscape is to that of Ireland.