Eganville is a small community occupying a deep limestone valley carved at the Fifth Chute of the Bonnechere River in Renfrew County, Ontario, Canada. It is in the township of Bonnechere Valley. This village also has two of the most popular restaurants in the upper Ottawa Valley: The Granary (Austrian cuisine) and Frisco’s Grill. 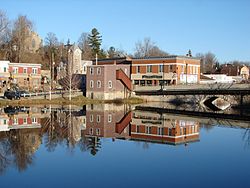 In 2009, Eganville became the home of the Stone Fence Theatre’s productions of local historical and musical dinner theatre. The Bonnechere Valley is also a gateway to some of north eastern Ontario’s most well know tourist destinations. Including the nearby Bonnechere Caves. The caves are located under a hill of limestone, said by geologists to have been the bottom of a tropical sea 500 million years ago. Eganville is also a stop off to destinations into central Ontario. Hwy. 41 runs north south from Pembroke Ontario to Napanee Ontario.

The power of the river has been harnessed since 1848 but it was John Egan’s grist mill that gets credit for stimulating the town’s growth.

In 1911, the Great Fire destroyed many of the buildings in Eganville. Some 75 homes were lost in all along with schools, churches and industries along both sides on the Bonnechere River. This fire was started by two teenagers smoking cigarettes in a shed. A year later, the Municipal Building was erected, and served as the village post office for almost a century. This building has since become the home of the Bonnechere Museum and one of the most well known symbols of Eganville.